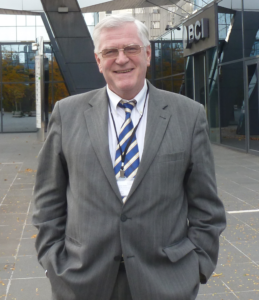 Corresponding Member of the National Academy of Sciences of Ukraine

Prof. Rostyslav Stoika is the Founder and Co-Chairman of the 1st, 2nd, and 3rd International Parnassus Conferences on Biochemistry of Cellular Processes (since 1996).

Since 1989, he has been teaching at the Department of Biochemistry of Ivan Franko Lviv National University (Professor of the Department). Since 2016, he has also been working as a Professor at the Department of Normal Physiology of Danylo Halytsky Lviv National Medical University. He was employed at the University of California, Los Angeles (USA, 1994) and Sinai Cedar Medical Center (Los Angeles, USA, 1999-2000). Prof. Stoika consulted 3 Doctoral dissertations and mentored 22 Candidate of Sciences dissertations related to apoptosis.

Prof. Rostyslav Stoika heads a scientific school in Lviv to study the biochemical mechanisms underlying the regulation of the functioning and death of normal and pathological cells of animals and humans. Prof. Stoika has authored 375 articles in academic journals, 4 monographs, and 17 book chapters. He is also an author of 3 methodology manuals, 19 patents of Ukraine, including 9 invention patents. He is a co-author of 2 patent applications for the United States and Europe, and the Editor-in-Chief of the monograph titled “Multifunctional nanomaterials for biology and medicine: molecular design, synthesis and application” (Kyiv, 2017). He is the Editor-in-Chief of Studia Biologica and Deputy Editor-in-Chief of Biotechnologia Acta.